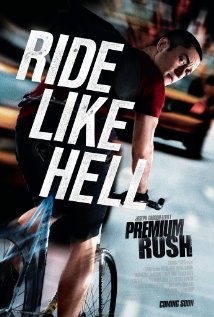 Once upon a time, August was considered the dumping ground for mediocre films that, for whatever reason, have lost the love and support of their studios and were left to duke it out for the “end of summer” scraps. Lately, this has seemed to change. Sylvester Stallone brought The Expendables in 2010, which grossed over $100 million. It’s sequel, Expendables 2, is enjoying a strong reception by audiences, bringing in $28 million in its opening weekend. Last year’s Rise of the Planet of the Apes was an August release and made $176 million with a sequel slated for 2014.

This year’s August releases are no exception. First, Bourne Legacy, then ParaNorman and Expendables 2, and now the electrifying Premium Rush. Premium Rush puts a microscope over the lives of NYC bike messengers. This is a very misunderstood and under-appreciated microcosm of modern civilization, which makes it ripe for a brilliant, late-Summer action flick. Joseph Gordon-Levitt returns to his indie roots as Wilee, a thrill-seeking bike messenger who’s steel-framed bike is custom equipped with no gears and no brakes. Wilee’s philosophy on bikes is like his philosophy on life; “I like to ride…can’t stop, don’t want to.” With the introduction of a McGuffin in the form of an envelope, this movie is off and it doesn’t want to stop either.

The envelope entrusted to Wilee for delivery is also desired by corrupt NYPD officer, Bobby Monday, played on full-tilt by Michael Shannon. The cat and mouse chase format is kept fresh with a tricky non-linear timeline, some imaginative multi-dimensional stunts, and enjoyable supporting characters like Wilee’s girlfriend Vanessa (Dania Ramirez) and his jealous pumped-up rival, Manny (Wole Parks). I was surprised how much I enjoyed Premium Rush, but this is a film that is quite aware of its escapist qualities and goes to great lengths to protect them and not exploit them. Writer/Director David Koepp keeps the pace quick and the audience cheering. I hope August continues to see fun, exciting movies like Premium Rush, so that movie studios have no dumping ground, but rather an obligation to simply release good movies. B+