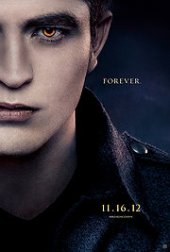 We may be edging near the saturation point of vampire-related entertainment, however, as brooding, Washington-state-based, vampire/werewolf romance films go, Breaking Dawn: Part 2 easily ranks in the top five.  Twi-Hards have been waiting over four years to finally see how the cinematic adaptation of the Stephenie Meyer series of books will end.  All things considered, the end result is actually rather exciting.

Breaking Dawn: Part 1 left us staring into the (red) eyes of Bella post-pregnancy and post-transformation.  Part 2 begins at this same moment as Bella adapts to her new vampiric life-style and her new role as mother to the half-human, half-vampire child, Renesmee.  Now if you haven’t managed to suspend your disbelief at this point, leave the theater; I’m sure Lincoln is playing right next door.  Regardless, as Renesmee rapidly grows, the Cullen clan finds themselves in new territory, raising a natural newborn.  Furthermore, word spreads to the Volturi that such a unique child exists and that it might be immortal, and therefore, illegal.  This looming inevitability of a final showdown between the Cullens and Volturi drives the plot unlike any of this film’s predecessors, and as climaxes go, this one is by far the best.

In spite of this, there is certainly no shortage of excessive melodrama or corny moments of tepid dialogue.  While Stewart and Pattinson have reached an iconic status as leads Bella and Edward, they continue to fail to deliver powerful performances in these roles.  Throughout the series, both leads seem too comfortable resting on the idea that these characters do nothing but whisper, stare, and have sex.  If you buy Kristin Stewart as a caring mother in this film, I have the actual bowie knife that killed Dracula to sell you.  Taylor Lautner holds his own as Jacob, who’s scene with Bella’s father Charlie Swan (Billy Burke) steals the movie.  Nonetheless, no one goes to see this series of films to be wowed by the range of its actors.  In fact, this film introduces so many characters that none of them have much time to shine (sparkly or otherwise).  What these characters do bring is a host of new X-Men-style super powers, which are enjoyable elements to the film.  Thus, the film delivers in other ways.  Its pacing is strong as it does not dwell on any one moment in its journey to the final showdown.  Additionally, its action is crisp and deliberate; there is very little to distract from the story’s momentum.  The cast does their job, but these successes are the result of writers Melissa Rosenberg and Stephenie Meyer along with director, Bill Condon.

The vampire craze that started all of this may be starting to show some signs of declining slightly, yet this is a fairly strong send-off to an epically successful series of adolescent-aimed pop culture.  It is clearly the best of the series, which adds a significance to all five of the films.  The closing credits illustrate this as they celebrate the entire cast of the films together.  Pop culture vampires may be in their eclipse rather than beginning their new moon, but Twilight certainly lived to see the break of dawn.  B