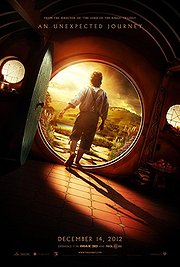 There was once a beloved trilogy. One day, its creator decided a series of prequels were in order, so he directed…Star Wars: Episode 1-The Phantom Menace. Thus was born mankind’s apprehension and speculation over prequel trilogies. A case is yet to be made for why Peter Jackson’s adaptation of J.R.R. Tolkien’s The Hobbit requires three parts. Nonetheless, The Hobbit: An Unexpected Journey is a very good film…whew, what a relief!

The Hobbit: An Unexpected Journey takes place sixty years before Frodo takes his first step towards Mordor. The story is simple this time around, as we return to Middle Earth. Bilbo Baggins (Martin Freeman) is persuaded, or rather coerced, by Gandalf (Ian McKellen) to assist a party of 13 dwarves in their quest to reclaim their lost kingdom. Freeman is very effective as the neurotic, Woody Allen-esque, Bilbo. His nuanced touch to the role gives the audience a very likable and enjoyable central character arch that is only accentuated by our familiarity with him from Jackson’s previous Lord of the Rings films. McKellen slips seamlessly back into his gray robes as Gandalf. While Gandalf is always wise and sensible, McKellen portrays him here as slightly less “urgent” given the lessened threat to Middle Earth and existence that occurs in The Hobbit. This lack of urgency translates to the entire film, which may disappoint die-hard Rings fans. There are more scenes in the “silly” category here than in the previous trilogy. Additionally, there is simply a lowered sense of critical doom and immediacy in this storyline. The film’s opening scenes go on for quite a while and while enjoyable, the end result is a slightly bloated film.

These criticisms are certainly legitimate, but they are truly its only faults. The film looks beautiful and lives up to what one would expect from Jackson’s take on the Tolkien mythology; New Zealand should probably be nominated for best supporting actor. The adaptation of Tolkien’s book is developed in such a way that it will lead up to the Lord of the Rings trilogy very nicely. Familiar characters appear along the way, and they are not unnecessary or false. All of them further the story and add something to the film, which is a credit to the host of screenwriters including Guillermo del Toro and Jackson himself. Furthermore, the dwarf plotline is elevated from the childish mood reflected in the novel to one that feels a bit more mature. This is a good decision and while younger kids can enjoy this film (if they have a long attention span), it is clear that the Hobbit films look to maintain a similar tone to the previous films in the series. At the end, there is quite a bit to like about The Hobbit: An Unexpected Journey. While it lacks the epic quality and complex narrative of The Lord of the Rings films, the groundwork is set for an excellent companion trilogy that is fun, technically impressive, and brilliantly respectful to fans and film lovers. B+

4 thoughts on “The Hobbit: An Unexpected Journey”