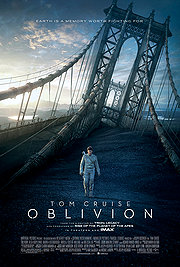 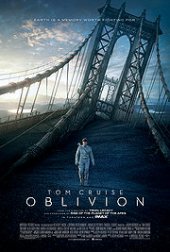 Hot-shot pilot moves in expensive, cutting edge fighter jets, wide-scenic shots of Tom Cruise on a motorcycle…get “Take My Breath Away” out of your head – we’re talking about Oblivion here! While the similarities between Oblivion and Top Gun end at the aforementioned, there is no question that “Maverick” has all the right moves to portray galactic mechanic, Jack Harper in the most visually dazzling film of the year so far.

Oblivion opens in 2077 after an alien threat has left Earth a barren wasteland fit only for extracting a few vital resources before humanity abandons the planet altogether to start a new existence on Saturn’s largest moon, Titan. Cruise’s Harper is a glorified serviceman who supervises and repairs the various resource-extraction devices along with his partner Victoria (Andrea Riseborough). As the two near the completion of their jobs on Earth, Harper begins having visions of his life prior to the mandatory memory-wipe that is required for service-workers. These visions lead him on a chain of events that cause him to question everything he thought he knew about his life.

Director Joseph Kosinski creates a vividly rich and nuanced futuristic environment where much of the technology feels like what truly is on the horizon. Kosinski directed 2010’s under-rated visual spectacle, Tron Legacy, and it is apparent that he has his finger on the pulse of crisp, sci-fi style. Narrative-wise, Oblivion is a much more complex story than is likely expected. The complexities do provide some depth to the film and force the audience to pay close attention; however, the juxtaposition between the style and the narrative is not smooth. Occasionally, the film is forced into a lull as it tries to tie up its intricate plot points without sacrificing its visual pageantry. This is most apparent in the scenes that develop the sub-plot involving a human resistance leader named Beech (Morgan Freeman) and a mysterious NASA survivor named Julia (Olga Kurylenko).

Oblivion’s chief attributes are clearly its visual elements. Freeman and Kurylenko’s characters are thinly developed and the actors are mostly unremarkable. However, it is becoming more and more apparent that any film that features Morgan Freeman in any role is most likely not a bad movie. Thematically, the film is successful at developing some intriguing ideas about discovery and purpose. The film acts as a subtle homage to familiar films like Alien, 2001: A Space Odyssey, and even Wall-E. Speaking of familiar, the score is oddly reminiscent of Christopher Nolan’s Dark Knight films. This is simply an observation, but having Morgan Freeman in the film as well certainly makes one wonder if this is some form of statement. Regardless, while some will no doubt be puzzled or dissatisfied with the conclusion, Oblivion mostly works as an epic and visually alluring entry into the science-fiction canon. B+

On a side note, seeing the film in IMAX or an XTREME screen is recommended as the film has so much to offer visually. Oblivion is rated PG-13 and runs 125 minutes.