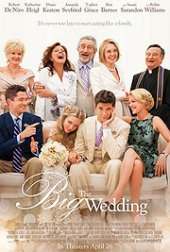 With the highly anticipated release of Baz Luhrmann’s The Great Gatsby, I decided to re-read the F. Scott Fitzgerald classic novel about moral decay in American Society.  Reading the book again was meant to assist me in my review for the upcoming Gatsby, but it turns out there’s another story of tragic spoiled Americans consumed with their own lavish excesses already in theaters, and it’s called The Big Wedding.

The Big Wedding is a star-studded turkey of a movie that can be enjoyed as more of an oddity than anything else.  On the surface, it appears to be a run-of-the-mill romantic comedy about the goofy pitfalls that occur within the chain of events leading up to a big American family wedding.  However, Justin Zackham both writes and directs a film that if anything, actively attempts to rationalize dishonesty as an honorable and necessary trait within the family dynamic.

The story revolves around the Griffin family as they prepare for the wedding  between adopted son Alejandro (Ben Barnes) and his fiancé Missy (Amanda Seyfried).  The Griffin patriarch is Don (Robert DeNiro) who is hosting the wedding at his home that he shares with his girlfriend, Bebe (Susan Sarandon).  DeNiro continues his series of baffling role choices here, and it’s hard to envision what drew him to the character of Don, although he probably hasn’t played a character who takes this many blows to the head since Raging Bull.  The wedding draws an ensemble cast together that includes Don’s ex-wife Ellie (Diane Keaton) and Don and Ellie’s two children Lyla (Katherine Heigl) and Jared (Topher Grace) both of which vary in degrees of estrangement from Don.  The conflict hinges on the news that Alejandro’s biological mother Madonna will also be attending the wedding, and her ultra-conservative views on marriage and divorce cause Alejandro to plead with Don and Ellie to pretend to be married so not to offend her.  Various other subplots regarding Lyla’s marriage troubles, Don’s relationship with Bebe, and Jared’s awkward fling with Madonna’s beautiful daughter Nuria fill out the film’s 89 minute running time, but none of them are remarkably interesting or funny.  Additionally, Robin Williams is given absolutely nothing to do as Father Moinighan in a screenplay that feels like a series of wasted opportunities.

While The Big Wedding certainly disappoints given its potential, it is oddly watchable.  Most of the characters are quite unlikable, and it begs the viewer to question whether this is intentional.  Katherine Heigel’s character is uniquely deplorable, an example being when she candidly announces who she needs to “lynch” to get a Cosmo.  Zackham makes it quite clear that every character has, in one way or another, used deception, fraud, or trickery as a recourse for trying to keep a family together.  This thematic exploration and justification for dishonesty feels wildly out of place in a supposedly fun wedding comedy, but it is a strangely fascinating direction to take.  Perhaps this film would work better if it were more Gatsby and less My Big Fat Greek Wedding, but what we’re left with is a bit of a mess, albeit a somewhat intentional one. D+

The Big Wedding is rated R and runs 89 minutes.  You might want to make sure there’s an open bar before attending this wedding.

One thought on “The Big Wedding”