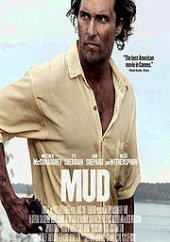 Mud is a slice of Americana.  Two young Arkansas boys, Ellis and Neckbone, happen upon a runaway convict hiding out on a deserted island in the Mississippi.  McConaughey plays the convict known only as “Mud.”  He is charming and mysterious, and as his story begins to come into focus, the boys are swayed to help him fix up a broken down boat so he can meet up with his girlfriend Juniper (Reese Witherspoon) and escape down the river to freedom.  Now if this sounds slightly familiar, perhaps you’re thinking of another slice of Americana where two boys try to help a social outcast find his family and escape captivity by traversing the Mississippi River: Mark Twain’s The Adventures of Huckleberry Finn.  The parallels between Mud and Finn are actually quite numerous, most notably that both examine the trials of a young boy’s integrity.  Whether or not director and writer Jeff Nichols is intentionally invoking Finn, he has nevertheless created a fine companion to the 1885 novel.

The success of Mud lies in the hands of McConaughey and relative newcomer Tye Sheridan, who plays Ellis.  As the unlikely relationship forms between them, Nichols is able to weave in significant observations about fatherhood, childhood, love, and respect.  Protection is a recurring motif that truly sits at the heart of the film.   In fact, known for taking his shirt off, it is ironic that in Mud, McConaughey’s shirt remains on as a symbolic form of protection.  Consequently, it is actually quite significant when it is ceremoniously and inevitably removed.

Mud is certainly no technical achievement and will no doubt be lost in the shuffle as the flashy summer blockbusters start releasing, but it is a strong resonating film full of the kind of tension, drama, humor, and realism Mark Twain would be proud of.  A-