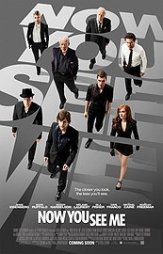 In 2006’s The Prestige, Michael Caine plays a magician mentor who says, “Making something disappear isn’t enough; you have to bring it back.”  In Now You See Me, Caine plays a very different character who in one scene learns this lesson in a very painful way.  Now You See Me is like The Prestige-Lite, but that doesn’t mean it’s not good.

According to Now You See Me, successful illusions are the result of misdirection and timing. In a summer teeming with sequels, it is refreshing to see an occasional original idea hit the theaters, and it is this misdirection and successful timing that perhaps enhances the appeal of this film.  In one of the year’s most enjoyable opening scenes, four unique illusionists (Jessie Eisenberg, Isla Fisher, Woody Harrelson, and Dave Franco) are drawn together by a mysterious individual who provides them with the blueprints to a spectacular act that only they are capable of performing as a team.  The team, now known as the Four Horsemen, begins performing a series of illusions that involve various heists including the robbery of a major Paris bank.  Ironically, the spoils of these robberies go not to the victors but to the audience of the show!  This Robin Hood-esque form of vigilantism draws the attention of FBI agent Dylan Rhodes (Mark Ruffalo) who is given the exceptionally difficult task of proving exactly how the Four Horsemen are guilty of these robberies.

Casting is by far one of the film’s major attributes.  Eisenberg’s awkward, self-deprecating persona is put aside for one with much stronger bravado; watching him play J. Daniel Atlas is sort of like watching him play Mark Zuckerberg on personality steroids, in other words – kind of great.  Woody Harrelson does a great job as mentalist Merritt McKinney, which he plays kind of like Sherlock Holmes…on personality steroids – so also kind of great.  Dave Franco and Isla Fisher are very effective, but far less central to the film’s development.  Ruffalo and his partner Alma (Mélanie Laurent) are great at revealing the frustration of chasing down the clever illusionists, and Morgan Freeman and Michael Caine expertly provide further dimension to the story by exploring the darker side of “magic’s” purpose.

Now You See Me has a lot of fun with its premise.  Director, Louis Leterrier packs the film with style and tricks of the trade that keep the story moving and rather captivating.  Leterrier, mostly known for action films like The Incredible Hulk and the first two Transporter films, takes a crack at an ensemble piece where he must balance story with numerous characters – all the while keeping the audience in the dark about the exact motivations of these characters.  He is mostly successful at this, but the film requires a rather high level of suspension of disbelief and some serious overlooking of plot-holes.  It also has a bit of an unevenness to it as Leterrier cannot quite lose his proclivity for action and crowbars a 15 minute car chase smack in the middle of the film.  The scene is brilliantly shot and very exciting, but it also involves virtually none of the film’s main characters and thus, feels a bit superfluous.

Now You See Me is a lot of fun and fortunately, it does not run out of steam at the end.  Too often films like this are all set-up and no delivery, but the ending of Now You See Me is satisfying and very appropriate.  Hopefully, Now You See Me will find an audience and remind movie studios that once in a while an original idea is worth their consideration before they green-light Fast and Furious 12: Where Did I Put My Keys? B+

Now You See Me is rated PG-13 and has a running time of 1 hour and 56 minutes. If you like magic and you like movies and you’ve been looking for a way to make that miserable experience of seeing The Incredible Burt Wonderstone disappear, this is the movie for you!

4 thoughts on “Now You See Me”