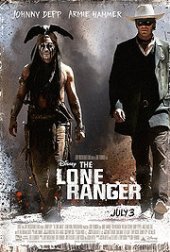 In this cinematic summer for baby boomers, two classic childhood heroes have been reborn on the big screen.  Both Superman and The Lone Ranger were developed into radio shows and comic books in the 1930s, and they would then go on to have their heydays in the 1940s and 1950s with popular TV shows.  It appears popular culture’s climate is having a nostalgic moment as origin stories of beloved heroes of the past are being introduced to a new generation of viewers, and so far so good.

For The Lone Ranger, director Gore Verbinski teams up with Johnny Depp for the fifth time after three Pirates films and 2011’s Rango.  It was the surprising success of the latter film that perhaps explains the evolution of their latest project.  The days of major box office success for the Western genre have all but ridden off into the sunset.  However, Rango, an animated film starring Johnny Depp as a pet chameleon who ends up in a lawless, desert outpost, legitimized that the genre may be on a resurgence and that kids may be a prime audience.  When included with 2010’s True Grit and 2012’s Django Unchained, three of the top four grossing westerns of all time were released between 2010 and 2012 demonstrating a rebirth of interest in the genre for both adults and kids for the first time in over 20 years.  Thus, Disney’s The Lone Ranger represents an inevitable attempt to get those two audiences together.  But is the film good enough to do it?

All in all, yes it is.  The Lone Ranger follows an ex-Texas ranger, John Reid (Armie Hammer), and his Indian friend, Tonto (Johnny Depp), as they try to exact justice in the American Old West.  The film begins in 1933, and is told in flashback to a young boy by an elderly Tonto, an odd choice of narrative structure.  We learn that Reid is the older brother to legendary lawman Dan Reid.  Dan’s pistol packing ways sharply contrast with John’s educated, John Locke inspired attitude towards law, justice, and government.  When Dan invites John to come along on a manhunt for escaped convict Butch Cavendish (William Fichtner), an ambush leaves John clinging to life and crushing his perspective of what he thought would be a more civilized West.  John’s savior comes in the form of Tanto who saves his life and joins him on a renewed quest for justice.

The story has all of the makings of a classic western adventure, but it does hit a few snags.  Hammer and Depp are excellent and their exchanges are fun and entertaining.  Initially, it feels an odd choice casting Depp in the role of Reid’s Indian companion, and given his introduction as an elderly Tonto, I was quite skeptical.  However, Depp’s charm comes through, and he treats the role with respect and charisma.  Verbinski knows his way around an action scene and some of the railroad stuff is exciting and well-produced.  The first half of The Lone Ranger develops the origin of the character and plays out as a well-crafted western.  Filmed on location in the picturesque and renowned Monument Valley, Arizona, the film looks and feels authentic.  Additionally, the climax is a tremendously entertaining sequence that will have crowds smiling and cheering.  However, the film does makes two nearly unforgivable mistakes that do negatively affect the film’s overall reception.  First, Verbinki, known for the more-is-better approach, stretches the story out for an unnecessary two and a half hours bringing the plot to ludicrous scenarios like Mexican stand-offs and ridiculous ways to aim guns at people but never pull a trigger.  This type of film does not have the substance to withstand this type of running time, and while the film clearly nods to classic westerns like Once Upon a Time in the West, it is hardly complex enough to demand this type of attention.  Second, like Man of Steel, a franchise is clearly in the works here and much of the greatness that is The Lone Ranger is overtly left for future installments.  For most of the film, the “mysterious masked man” is nothing but a bumbling buffoon cutting his teeth in silly situations.  The confident seeker of justice and serial adventurer is yet to come.  Nonetheless, the climax is a welcomed payoff that almost erases the bad taste left by these errors, and the score and taglines are used sparingly and effectively.  Fans of the original should be pleased and new fans will be made, kemosabe.  B-

The Lone Ranger is rated PG-13 and as mentioned above has a running time of 2 hours and 29 minutes!  A decent supporting cast includes Helena Bonham Carter, Tom Wilkinson, and Barry Pepper.  After the initial credits start an extended scene closes them, but this scene is more symbolic than enduring and does not culminate into anything major.

3 Replies to “The Lone Ranger”