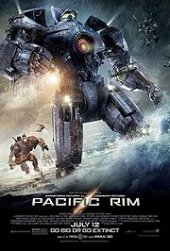 Do you know where your inner child is? Well with Pacific Rim, Guillermo del Toro has created a dazzling visual spectacle determined to find it for you and leave you wide-eyed and astounded.

Pacific Rim finds the world in the near future with alien monsters emerging from the sea where they have been at rest for millions of years. Finding our deteriorating atmosphere well-suited to their biology, masses of these nearly 300 feet tall creatures known as Kaiju begin laying siege to Earth claiming millions of lives and squandering its resources. Setting its differences aside for perhaps the first time in history, the world comes together, pooling its global assets to develop a weapon that can combat these enormous threats. The answer: 250 foot tall robots called Jaegers controlled simultaneously by two pilots who through a mind meld process called “Drifting” are able to provide the neural power necessary to run the massive machines.

Del Toro is no stranger to the fantastic. He has co-written the screenplays to the recent Hobbit series as well as written and directed the fantastic over-the-top Hellboy films and Blade II (the best one). However, the film he may be best known for is his remarkable twisted fable Pans Labyrinth, which won three Oscars. Here del Toro continues his hitting streak by accomplishing the very thing that has seemingly puzzled Gore Verbinski and Michael Bay for years: creating a wildly epic action film that isn’t clunky, irritating, or devoid of excitement. It would seem very likely for an audience to become detached from a film about giant alien monsters fighting massive robots, but in Pacific Rim, this is not the case. Travis Beacham’s script develops his characters and not just the action. Furthermore, del Toro’s directing makes sure we care about each battle and understand what’s at stake at every turn; this allows the audience to never feel desensitized by the escalating preposterousness.

Who is Charlie Hunnam? Well if you don’t watch Sons of Anarchy, you’d assume he’s a British guy trying his damndest to play an American and not succeeding, and you’d be right. Hunnam plays Raleigh, a modern reincarnation of the Maverick archetype from Top Gun (look for the “you can be my wingman” moment mid-way through the film). Nonetheless, this type of bravado induced superstar with a chip on his shoulder is exactly what a film like Pacific Rim needs at its core. Accent aside and tempered only by his new partner, Mako (Rinko Kikuchi), Hunnam is extremely likable and handles the sensitive tough guy persona nicely. Hunnam is joined by a bevy of fun supporting characters who del Toro seemingly mined from successful television shows. Idris Elba from The Wire and Luther commands the screen as General Stacker Pentecost, and it would be a safe (and welcomed) bet that we’ll see Elba on the big screen again and often. Hellboy himself, Ron Pearlman, (and Sons of Anarchy alum) sinks his teeth into the campy role of black market entrepreneur Hannibal Chau, a name he geniusly created based on “his favorite historical figure and his second favorite Szechuan restaurant in Brooklyn.” Finally, there’s It’s Always Sunny in Philadelphia’s Charlie Day, who channels Rick Moranis as Dr. Newton Geiszler who plays the Oscar to his partner’s (Burn Gorman) Felix in an “Odd Couple” of scientists looking to discover a brainy solution to the Kaiju attack while Raleigh and company cover the brawn angle.

I’ll admit, Pacific Rim was the film I was most anticipating for the summer. Yet all bias aside, it is an example of everything a big, fun summer movie should be, and if you’ve seen Iron Man 3 and Star Trek Into Darkness, then Pacific Rim should be next on your list. A

Pacific Rim is rated PG-13 and has a running time of 2 hours and 11 minutes. It is a post-convert to 3-D film, so it is not necessary to see it in that format, yet The People’s Critic will admit that the conversion is top notch. Also, be sure to stay at least mid-way through the credits for a very rewarding bonus scene that is worth the wait. Those who wait through the entire credits will get a minor, yet potentially important reward as well.