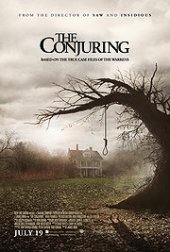 One of the best things you can say about a horror movie is simply this: it’s scary.  In January, I wrote a short discussion on the horror genre masked as a review of Mama.  I have chosen to foolishly assume that my small blog post has single handedly reminded filmmakers and studios of the potential effect creative horror films can have.  The Conjuring is scary.

Strangely enough, the man who revitalized the exploitative “torture-porn” style of horror with his 2004 film Saw is now looking to do the very same thing to the classic horror style that films like Saw all but demolished.  James Wan helms the efficaciously eerie film, The Conjuring which tells the true story of two paranormal investigators who agree to help a family whose house may be infested with a demonic presence in 1970s New England.

From the Exorcist inspired main titles, The Conjuring is off and running.  We are introduced to paranormal investigators Ed and Loraine Warren (Patrick Wilson and Vera Farmiga) as they hear out potential clients explaining a feared demonic infestation by way of inhabitation of a very disturbing looking doll.  We discover that Ed is a demonologist who while not ordained is still accepted among the Catholic church and his wife Lorainne is a clairvoyant, both with many successful cases behind them.  After this introduction, we are informed that the true story that follows details the most horrifying case that the Warrens have ever encountered.  The film’s structure then fragments into a dual narrative where we simultaneously follow the Warrens as well as the frightening events that lead a family to seek them out.

This dual narrative is an excellent choice for Wan to keep the scares coming as well as inform the audience to what is happening while not losing track of either the Warrens or the Perron family’s decent from infestation to oppression and ultimately to possession.  The story of a family bothered by something extra-terrestrial is not as fresh of an idea as it once was, but Wan’s simple techniques like a quick focus  or a back and forth camera pan offer terrifying results.  Additionally, the Parron family is quite large composed of Roger (Ron Livingston), Carolyn (Lili Taylor) and their five daughters.  This allows the danger to feel more real and their options to seem more limited while the terror is more expansive.  Furthermore, the appearance of a bouncing ball, a creaking door, or a quick clap provides some of the best scares in recent horror history without feeling cheap or cut-rate.  Not since the first Paranormal Activity have ghostly scares been so effective, but unlike Paranormal Activity, the scares in The Conjuring do not necessarily come with the forewarning of a timestamp on a video camera.

Reviewing a good horror film is an art in itself as quite a bit must remain unsaid, but enough must be said to entice the reader to see it.  James Wan has created a horror film that appeals to a nostalgic retro vibe that calls back to the monumentally creepy films of the 70s like The Exorcist, Rosemary’s Baby, and Don’t Look Now.  I first saw The Exorcist at age 17 on home video on a sunny afternoon and it still scared the ever-loving shit out of me.  I can say that The Conjuring provided me with the closest experience to that in a long time.  I’m sure it will be quite a while before I decide to watch The Conjuring alone at night.  A-

The Conjuring is rated R and has a running time of 1 hour and 52 minutes.

2 Replies to “The Conjuring”