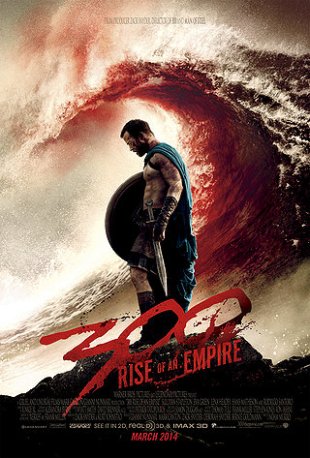 Like most people, when I walked out of the theater in 2007 after seeing 300, I immediately asked, “Well, the Spartans were sure amazing, but what were the Athenians doing during all of this?”  Who knew that in seven short years, my answer would arrive in the form of 300: Rise of an Empire!

Now, all of you clamoring for a sequel to 300, hold your helmets.  300: Rise of an Empire is more of a companion to its predecessor than a sequel.  The vengeful and honorable Queen Gorgo (Leny Headey) after having lost her king and husband Leonidas in a tragic battle against the massive Persian army at Thermopylae now looks to protect her City-State of Sparta by laying low and fortifying the city.  In preparation, she begins to tell the story of the God-King Xerxes (Rodrigo Santoro) and his evolution from child to deity.  The film transitions to “spin-off” as we are introduced to Thermistocles (Sullivan Stapleton), an Athenian general who in a calculated attack against the Persian army at Marathon succeeded in killing Persian King Darius paving the way for his son Xerxes to take over.  Xerxes’s ascension to a God-like status, however is thanks to King Darius’s trusted commander of the Persian navy, Artemisia (Eva Green).  Thermistocles’s plan against Xerxes involves getting all of the city-states in Greece to mobilize and join forces against the Persians, but he is struggling to get any support.

What follows is a warmed over retread of the original 300 plotline, but from an Athenian point of view.  You’ll see Thermistocles give impassioned speeches to his out numbered yet capable army.  In fact, in one scene, Thermistocoles explains how Athenian soldiers work as a unit and protect the man to their left.  This is virtually lifted word for word from a similar speech delivered by Leonidas to hunchback, Ephialtes, in the original film.  You will also see many scenes of fast-paced action with sudden slowed down shots of brutality and buckets of 3-D rendered blood spatter.  What you won’t see is anything reminiscent of the innovative and groundbreaking brilliance of the first film.  The acting is appropriate for its genre, however, and the scene where Thermistocoles meets Artemisia for the first time is compellingly campy, if not borderline pornographic.

The change of scenery from ground war to naval battle is a welcomed change.  The brilliance of ancient sea battles is on full display and does hold your attention.  But it also comes at a loss of some of the greatest stylistic achievements of the original 300.  It is quite clear that most if not all of the sea battle scenes are filmed on a sound-stage.  While the same was true for 300’s epic battle scenes, director Zack Snyder was able to play with shadow, perspective, and light to produce a visually stunning look never before seen on film.  300: Rise of an Empire director Noam Murro’s film is too dark and conventional and at times comes off more as a joke than anywhere near spectacular.  In once scene, Thermistocoles while on board an Athenian ship, suddenly jumps on a horse (that’s right a horse!) and rides across several sinking and/or flaming ships while slaughtering every Persian in his path to arrive face to face with Artemisia for the climactic battle.  #PersianAttackOnHorseback!  Never did 300 reach this level of self-indulgence, which is what helped make it so effective.

300: Rise of an Empire is not a complete failure, but it is another entry in a long line of sub-par second installments.  The franchise is certainly open for more installments and perhaps with the right mixture of writing and creativity, the ship can still be righted.  C+