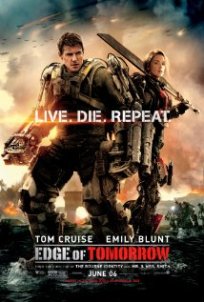 Edge of Tomorrow, the latest sci-fi/action film from Tom Cruise, is best marked coincidentally by two outrageously dissimilar events: the 70th anniversary of D-Day and the 30th anniversary of the film Groundhog Day. In fact, 70 years to the day prior to the US opening of the film Edge of Tomorrow, allied forces invaded Normandy suffering tremendous casualties but contributing to what would eventually be an allied victory in World War II. Now one may ask, who in their right mind would choose a day like that to live over and over and over? Well, that is precisely what John McQuarrie explores in his screenplay for Edge of Tomorrow.

Cruise plays Major Bill Cage, a coward of a military officer who has used his business experience and education to stay as far away from combat as humanly possible even with the world under siege by a brutal and powerful alien race. However, after pissing off the wrong general (Brendan Gleeson), Cage finds himself on a London army base under the command of Master Sergeant Farell (Bill Paxton) with transfer papers listing him as a deserter and stripped of his rank. Now, Private Cage will be among the first to land on the beach of Normandy in a secret mission to catch the enemy by surprise.

It turns out the aliens have a secret weapon that makes the human resistance utterly useless. Several aliens known as “Alphas” possess an ability to “reset” upon death and relive the day with the knowledge of what will happen next. Thus, the aliens can always anticipate every enemy move and plan for it on a continual basis until victory is won. What the aliens didn’t count on and what cowardly Cage inadvertently discovers is that if a human were to slay an Alpha and be covered in its blood, that human would then absorb the same power to “reset.”

Armed with his new power but entirely without any skills to fight a war, Cage teams up with Rita Vrataski (Emily Blunt) a legendary soldier who secretly once had Cage’s power but lost it. Together, Cage and Vrataski may have what it takes to save the world.

The “reset” gimmick is most notably and skillfully used in the late Harold Ramis’s film, Groundhog Day. Many films have used similar gimmickry – some to good effect, some poorly – but few have used it so identically. Nonetheless, director Doug Liman (The Bourne Identity, Go, Swingers) captures the fun nature of Ramis’s film and instead of using this concept for romance, he re-purposes it for a more fitting genre: science-fiction. Liman gets the tone just right as he tracks Cage’s evolution from detestable loser to someone of merit, and it’s a fun ride. He weaves together a story that pulses with energy and humor, and the alien antagonists are worthy opponents, fast moving and very deadly. The film does get a bit lost in its own absurdity once in a while and Liman shamelessly uses the “reset” plot device to hit the audience over the head with the film’s theme about humans being in control of their own fate (Bill Paxton’s character is basically a Ned Ryerson, designed to spew the same thematically rich monologue every 15 minutes!). But I liked Edge of Tomorrow. Cruise proves he’s still up to the challenge of carrying a big tentpole of a movie, Blunt is a fine co-star, and Liman has produced a film that while somewhat familiar, is just fresh enough. B+

Edge of Tomorrow is rated PG-13 and has a running time of 1 hour 53 minutes.

2 thoughts on “Edge of Tomorrow”