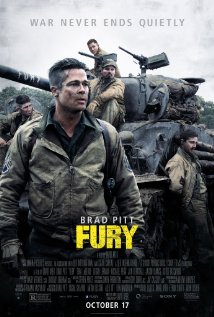 “Let there be WAR!” said Brad Pitt after his wife Angelina Jolie was tapped to direct the upcoming World War II film Unbroken. Pitt stars in his own WWII film, Fury. We won’t know which is the better of the two until Unbroken premiers in December, but Pitt’s film does not disappoint. Your move, Jolie.

In Fury, Pitt plays sergeant Don “Wardaddy” Collier who commands the five-man tank crew of a commandeered German tank dubbed “Fury.” Wardaddy’s crew includes four other militarily nicknamed men: driver Trini “Gordo” Garcia (Michael Peña), artillery expert Grady “Coon-ass” Travis (Jon Bernthal), canon operator Boyd “Bible” Swan (Shia LaBeouf), and newbie Norman Ellison (Logan Lerman), later christened “Machine.” The film makes much of these alternative identities as it delves deep into the effects of war. Lerman’s Norman is the “greenhorn” of the group, having been in the army only 8 weeks when he is assigned to Pitt’s crew. Norman’s previous experience as a typist has not prepared him one bit to assume the gunman post in Collier’s squad, and it certainly has not prepared him to clean up the remains of the previous man who occupied it. Now, as the US pushes its way into Germany and Hitler’s forces grow more desperate Wardaddy and company are sent on mission after dangerous mission to secure German cities.  This is the crux of the film’s plot and while it can be viewed as modest or simplistic, it works.

Fury is directed by David Ayer whose most recent film End of Watch was a sensational piece of guttural tragedy; Fury captures that same tone vividly. While thousands of war films exist, a majority of which are World War II films, Fury rejuvenates the genre with powerful scenes of tank warfare that drip with intensity and ring with authenticity. A scene of note involves the crew facing off against a German Tiger tank where every move must be calculated to the most frustratingly critical degree or it’s lights out. What Ayer accomplishes with both his direction and his screenplay is that he strikes an engaging balance between the rigors of war and the humanity of its soldiers.

The sets are truly remarkable and combined with some of the camera work they can be devastatingly heartbreaking in the style of Saving Private Ryan or even Gone with the Wind. Still at times the film can feel a bit uncoordinated and even cliché especially in some of the dialogue, but Fury thrives more on action and mood than it does conversation. This is also a far more bloody and violent film than I expected. Some of the horrific gruesomeness may have been avoidable, but when looking at the film’s overall ambition, much of it is warranted. At the end, Fury is a surprisingly refreshing look at warfare and camaraderie that is well-acted and feels unique. Angelina Jolie has her work cut out for her. B+

Fury is rated R and has a running time of 2 hours and 15 minutes.