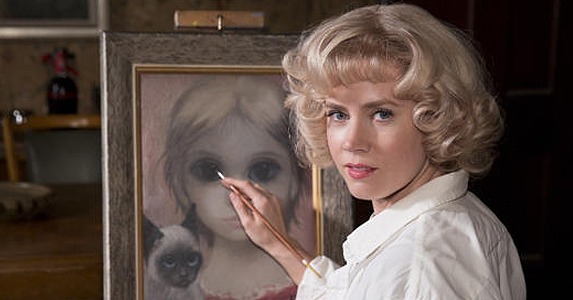 It bears mentioning that a conspicuous number of recent films have had a “stolen painting” premise at the core of their storylines. The Grand Budapest Hotel as well as the yet to be released Mortdecai, and Woman in Gold all feature this curious fad woven into their cinematic fabric. Now, Tim Burton’s Big Eyes ups the number to four within a year’s time, and while I’m not sure how long audiences are expected to relate to this bazaar trend, Big Eyes does nothing to discourage it.

Big Eyes tells the story of painter, Margaret Hawkins “Keane” (Amy Adams), who after being stifled by a bad marriage in 1950s Tennessee, moves with her young daughter to San Francisco in the hopes of starting a new life as an artist. There, she meets Walter Keane (Cristoph Waltz). Keane is everything Margaret had ever dreamed of: kind, romantic, charismatic, and an artist. Within months, Margaret falls for Keane and marries him, much to the chagrin of Margaret’s friend DeeAnn (Krysten Ritter). Now both officially Keanes, Margaret begins signing her distinctive paintings of waif girls with characteristically oversized saucer-sized eyes with her new surname. When Walter finds that Margaret’s waif-girl paintings begin to catch on as his dull Parisian cityscapes remain unnoticed, Walter assumes responsibility for all paintings signed “Keane” including Margaret’s. While Margaret is unhappy about Walter’s actions, his showmanship and charisma result in outrageous sales as long as Margaret can keep churning out paintings. Now knee-deep in fraudulent activity and smothered by her husband, Margaret feels she has no choice but to obey Walter and hand over her paintings and subsequently her humanity.

Waltz and Adams shine in Big Eyes. Both actors have cemented themselves as major players who elevate each film they are a part of, and this is no exception. Alexander and Karaszewski’s screenplay give both actors plenty of options for developing the tumultuous relationship. Adams embodies Margaret Keane’s struggle with respect and realism. While a victim of both time and circumstance, Adams does not let Keane entirely off the hook, in terms of the choices she made. Additionally Waltz does not allow Walter to sink into stereotype. In one particularly powerful scene, Walter goes toe to toe with an art critic played by Terence Stamp. Walter cannot take Stamp’s criticism even though he is technically not even the painter, which unbeknownst to both is precisely what Stamp is really criticizing.

While Big Eyes is an enjoyable film and a remarkably well acted one, it is basically a semi-complex tale of plagiarism. What makes this film most fascinating and intriguing is that it is a Tim Burton film. Burton, a director known for his dark, Gothic tales of oddity and peculiarity presents a film washed with sunshine and kissed by puppy dogs. It’s as if Tim Burton slapped his name on a Frank Capra picture…which is exactly the point! Burton brilliantly presents a film that bares his name but looks like it was created by another hand, skillfully mirroring his film’s thematic message and ironically creating perhaps his oddest and darkest film yet in the process. When David Lynch was selected to direct Disney’s The Straight Story in 1999, it certainly raised an eyebrow, but Lynch still maintained his ominous style even with a Disney film. Here, Burton purposefully adjusts his style going as far as having his reliable composer, Danny Elfman score the film with an uncharacteristically traditional score. I love the choices Burton makes with this film, all of which aid in leading up to the wonderfully absurd and enjoyable climax that really showcases Crisoph Waltz’s comedic chops.

Not that the film does not retain a few Burton trademarks. A clever black and white scene involving Walter on TV is oddly reminiscent of a similar scene from Edward Scissorhands and the “Big Eyes” motif is used to strange effect (fittingly, Amy Adams and Krystan Ritter have the biggest eyes this side of Christina Ricci and Amanda Seyfried). This is a film that has a lot to offer, plenty to analyze, and much to enjoy. However, it will certainly not be everybody’s canvas of choice; but this film, like Keane’s art itself, is nothing if not subjective. A-