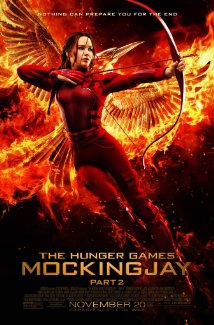 First things first.  I would like to share a quote about last year’s The Hunger Games: Mockingjay – Part 1 from one of my favorite critics, me:

“As a set of films, this could have been a very solid trilogy with a biting finale. The choice to split it up will forever prevent these films from achieving that overall status…of the three films in the series, this is the worst, but hopefully will give way to a superior conclusion.”

I was outstandingly  astute!   Splitting these films up single-handedly removed The Hunger Games from the zeitgeist.  Now, the superior Part 2 is released with buzzless fanfare and to the series’ weakest opening regardless of it being a loftier achievement than Part 1.  I will review The Hunger Games: Mockingjay – Part 2 as a stand-alone entry in the series, but hope secretly that director Francis Lawrence and editor Alan Edward Bell are sitting in a studio somewhere restoring this series as a trilogy by working on a 145 minute, single-film director’s cut of Mockingjay.

Mockingjay – Part 2 picks up right after Part 1’s sudden and violent conclusion.  Katniss Everdeen (Jennifer Lawrence) opens the film as she receives treatment and vocal therapy to repair the damage Peeta (Josh Hutcherson) inflicted when he attacked her.  His brainwashing by the Capitol was successful and now he’s a loose cannon and a prisoner of the rebels.  The plot from the previous film obviously continues as well.  The series of propaganda films that rebel leader, Alma Coin (Julianne Moore) had commissioned to build up Everdeen as a symbol of revolution have worked.  Now it’s time to march on the Capitol and take down President Snow (Donald Sutherland), a man’s whose fate has been hinted at since the moment his first name was revealed to be Coriolanus!

The march on the Capitol is the bread and butter of this film.  For those upset by the lack of traps and kill-or-be-killed confrontations in the last film will have their appetites satisfied this time around.  As the rebel army advances, a team led by Katniss plays clean-up crew, avoiding deadly hidden traps called pods.  Katniss’s team has the unique job of trailing the rebel army and shooting more propaganda videos that show “The Mockingjay” in various feats of victory.  This team is also the impetus for reuniting Katniss with her hometown sweetheart, Gale 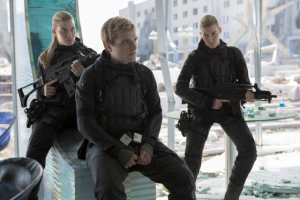 (Liam Hemsworth) and her fellow tribute turned fiancé turned nemesis Peeta, who was sent by Coin as part of the team to demonstrate how the Capitol’s grip on Peeta has ended – except he’s still pretty messed up.

A word about Jennifer Lawrence.  She is so good in this role.  Arguably, the role of Katniss is what made Jennifer Lawrence famous, although her critical acclaims are rather abundant.  Still, imagining anyone else in these films is nearly impossible.  Her commitment and emotion lift Katniss off the pages and into our hearts the way Judy Garland was able to do with Dorothy from The Wizard of Oz.  The impact of these films owe a lot to her performance.

Performances aside, this film does have some substance to it. Mockingjay – Part 2 proceeds to improve upon the comparison made in Part 1 between the futility of the “games” and a dogmatic battle to further one’s own cause.  At this, the film is quite successful.  The world itself is the arena and it is a battle of ideologies, not just the individuals who populate it.  It is eerily easy to draw countless associations between the conflicts in this film and those going on around us today.  The film works very well as a social commentary and one that could and should allow for some meaningful conversations between parents and teenagers.

I say teenagers and not kids because this film is unabashedly grim, and that’s in comparison to the other films in the series where kids try to kill other kids until only one is left.  This grim element does work slightly to the film’s deficit in that as a series of films, the true direction and ultimate ending point is not very fluid.  We feel less like we’ve been on a journey and more like we’ve been dragged through the mud.  To this point, Mockingjay –Part 2 is very much a different film that Part 1.  Readers of the third book know what to expect, but unlike the Harry Potter books and films that incrementally grow darker; Mockingjay sprints towards the finish line, especially in the darkness department.

The capstone film in the Hunger Games series has arrived.  The girl is still on fire, but the flame may not be as eternal as we once thought.    B+

Mockingjay is rated PG-13 and has a running time of 2 hours and 17 minutes.