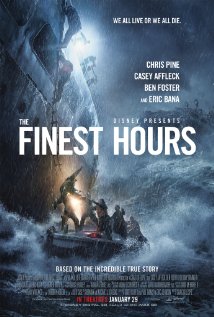 Disney has a way of producing some of the most formulaic live-action films that you just can’t avoid liking.  Films like McFarland, USA, Tomorrowland, Cinderella, and now The Finest Hours are primary examples of the old adage, “If it ain’t broke, don’t fix it.”

The Finest Hours tells the story of a courageous Coast Guard team who risk their lives to save the crew of a wrecked oil tanker off the coast of Cape Cod during a historic blizzard in 1952.  Chris Pine plays Bernie Webber, a shy but dependable coastguardsman looking for redemption after a failed rescue some years earlier, which resulted in the death of his friend and fellow coastguardsman.  After an oil tanker is torn apart by hurricane force winds, Webber is ordered by his commander (Eric Bana) to organize a crew and navigate out to the last known location of the tanker.  With weather conditions preventing any large vessels from heading out to sea, Webber and his crew, which includes Richard Livesey (Ben Foster), Ervin Maske (John Magaro), and Andy Fitzgerald (Kyle Gallner), head out in a small 12-man rescue boat to brave the seas and attempt the rescue.

What makes this film rise above the standard adventure/rescue fare is that while the plot I have revealed sounds relatively entertaining, I have not even gotten to the story involving the split oil tanker.  Director Craig Gillespie and writer Scott Silver’s decision to feature a balanced story between the rescue and the tanker crew was the film’s highlight.  Lead by engineer Ray Sybert (Casey Affleck), the film’s most exciting and powerful scenes revolve around the tanker crew’s battle to stay afloat whilst waiting for rescue.  Affleck steals the film with a performance far better than a film like this would have you expect.

The Finest Hours does drag one anchor in its wake and that’s the romantic plot between Webber and his fiancé, Miriam (Holliday Grainger).  This film is based on true events and Bernie and Miriam’s story are part of those events, but their relationship feels very cool and isolated.  What could have been played out as a strong love story where passion for life plays as a thread throughout the entire film, is surprisingly snuffed out in the scenes between Pine and Grainger.  Furthermore, Eric Bana’s portrayal as Commander Cluff is very uneven and at the end I was left confused as to what to think of him.

Still, The Finest Hours is a perfectly enjoyable slice of historic adventure.  These types of films rarely reach for the stars, but they are just good enough to be worthy of an audience. The story at this film’s core is one that was destined to find its way to the silver screen, and in most instances, it is executed very well.  While Pine is serviceable as the film’s hero, it is Affleck who is the standout and practically makes this film worth seeing all on his own.  B

The Finest Hours is rated PG-13 and has a running time of 1 hour and 57 minutes.

2 thoughts on “The Finest Hours”