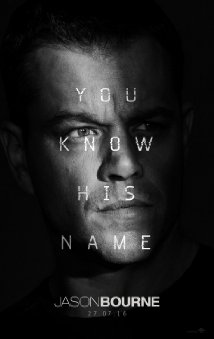 It’s been 9 years since Matt Damon last appeared as Jason Bourne.  An expansion of the franchise called The Bourne Legacy was released in 2012 starring Jeremy Renner, but Damon’s future playing the iconic action hero was on some shaky ground.  That is until Paul Greengrass agreed to helm his third Bourne movie, leading Damon to sign on as well.  Damon had been rather vocal over the years explaining that his decision to do another Bourne movie rested with Greengrass agreeing to do the same.  So here we are in 2016 with Jason Bourne. The partnership resurrected, and from the look of things, we still may not have seen the end of this collaboration just yet.

Jason Bourne opens with Bourne (Damon) seemingly at his low point. Off the grid and participating in underground bare-knuckle boxing matches, Bourne is out of the game and just trying to remain unnoticed.  That is until he is located by ex-CIA agent Nicky Parsons (Julia Stiles), who has been working as a hacker in Iceland and is looking to blow the lid off of the CIA’s latest secret programs. Her angle for getting Bourne to help her is the promise that she has discovered some major revelations about his past.  She has also discovered the latest CIA conspiratorial program, code named Iron Hand, which involves a collaboration between the CIA and a massive social networking platform called Deep Dream.  Parsons’s trudging around in CIA secret servers quickly gets the attention of new CIA director Robert Dewey (Tommy Lee Jones) and his protégé Heather Lee (Alicia Vikander). Subsequently, when Bourne suddenly surfaces in conjunction to Parsons’s hacking, Dewey and Lee start a no-holds-barred man-hunt to capture Bourne once and for all.  Dewey’s old-school mission is to eliminate Bourne using his trusted “asset” (Vincent Cassel) to do the job.  Lee, however has a new-school ambition based on a psyche profile on Bourne that she discovered.  She believes Bourne can be brought back into the CIA as an agent once again.  Regardless, Bourne is back on the grid and back on the run as he continues his search to uncover his past as well as to prevent Dewey from exploiting his power for personal gain.

Jason Bourne is basically everything you expect and want in a Bourne movie. There’s nothing entirely new going on here, but if you liked the previous films, you will like this one.  There is a moderately successful attempt at exploring some contemporary issues regarding privacy and responsibility on the side of technology companies.  This feels very fresh in light of the FBI’s recent lawsuit against Apple regarding assistance for unlocking the San Bernardino shooter’s iPhone back in February of 2016.  Otherwise, the film is traditional action faire with some good acting (Vikander), some adequate acting (Damon/Jones), and some terrible acting (Stiles, seriously – Razzie nominee potential here).

Overall, Jason Bourne is another step forward for the franchise and leaves things in a potentially compelling position to move in a different and fascinating direction.  It’s not the best Bourne and it’s not the worst Bourne; it’s just Bourne.

Jason Bourne is rated PG-13 and has a running time of 2 hours and 3 minutes.

Begin typing your search above and press return to search. Press Esc to cancel.