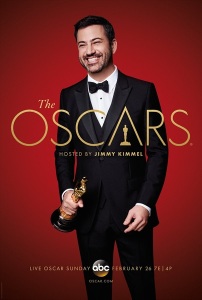 It’s Oscars Week! That’s right, this Sunday, February 26th at 8:30 PM EST, Jimmy Kimmel will host the 89th Academy Awards. This is always an exciting time for The People’s Critic, and as always, I welcome you to join in on the fun by filling out an official People’s Critic Oscar Predictions ballot. I have made my predictions, so now it’s your turn.

The ballot below contains the nominees for all 24 categories! On Oscar night, feel free to review the Summary of responses page for live updates on how your picks are doing, as well as view the live analytics for each category throughout the week!

Also, to make your Oscar night as La La Lavish as possible, feel free to grab a copy of this blank, printable ballot for your Oscar party, and if you’re looking for Fantastic Feasts and Where to Find Them, please enjoy our carefully curated 2017 Oscar dinner menu (printable version). Good luck!

So the fact that there’s a John Wick 2 is like a surprise Christmas gift for me. I watched the original John Wick in 2014 in the same way one would watch say, any Jean Claude Van Damme movie; which is to say, with limited expectations. I was surprised, as many others were, with the craft, choreography, and cleverness that went into it and I was content with that. However, I never expected a second “chapter,” nor did I expect it to be the best movie of 2017 so far!

John Wick: Chapter 2 is a true sequel. It moves the plot forward, it introduces new characters, it broadens the world from the original, and it ups the body count…like way ups the body count. We start right where you want to start, if you recall the conclusion of the previous film, with John (Keanu Reeves) getting his car back. Still wanting, “out,” John reburies his recently resurrected hitman persona along with his small armory of tactical weaponry. He gets a new dog and is ready to return to retirement. That is until an unwelcomed caller, Santino D’Antonio (Riccardo Scamarcio) arrives at Chez Wick with a request to hire him for a job. Of course, Wick refuses, but it turns out D’Antonio has a curious little item known in the underground hitman community as a marker. This marker was given to D’Antonio by Wick in exchange for assistance in his “impossible task” that earned him his previous retirement, and the holder has the right to demand anything from whoever granted the marker with no risk of refusal. But Wick refuses. And D’Antonio blows up his house. Thems the breaks in the hitman world.

Wick reluctantly decides to revisit D’Antonio’s request, which is a big one – go to Rome, and kill Santino’s sister Gianna to make room for him at the “table,” which is to say, the global underground hitman governing body. When things go afoul, Wick discovers a price has been put on his head, and Wick now must now search for redemption while thousands of the world’s greatest hidden assassins are around every turn looking to take him out.

What follows is a garishly fun and sadistic ride through a more realized hitman underworld. We get a deeper glimpse at the rules, regulations, and inner-workings of the ancient society. We also have almost no down time in this movie. It is action packed and fast-paced at every turn. The fighting choreography is outstanding, and even though there are numerous long-play fight scenes, none of them seem stale, each of them have tangible stakes attached to them, and they all have a creative twist that makes them unique. Take the worst action sequel in the last 5 years, A Good Day to Die Hard, and notice how spending the time to make the action work, makes the movie work! Wick’s scenes with friend turned nemesis, Cassian (Common) are especially enjoyable.

Of course with action as revved up as this, character development is the biggest casualty. There is no time for exploration of previously developed characters like Aurelio (John Leguizamo) and Jimmy (Thomas Sadoski), who make glorified cameos in this film. We get a little more of Winston (Ian McShane), but otherwise we are making way for newbies, most notably the reteaming of Reeves with fellow Matrix-er, Laurence Fishburne, who plays the local underworld Kingpin of the New York area, and who has also had some past run-ins with Wick in the old days. Also, the ancient Greek/Roman thematic motif furthered by characters named Ares, Charon, Winston, and Cassian is not lost on me, but it is a little silly.

John Wick: Chapter 2 is the blueprint for action sequels. It ups the action, and it ups the game, but it stays true to what made the original succeed. I daresay this film accomplishes its own “impossible task” of outshining its original. I am excited to see stunt coordinator turned director Chad Stahelski continue his work with creator and screenwriter, Derek Kolstad in future chapters because this teaming was flawless. I have heard rumblings of a prequel John Wick TV series, which would showcase Wick’s impossible task, and while this excites me, it also worries me. However, in this day of mixed media and the entertainment models followed by the Marvel universe, there is certainly potential for this world to continue to expand and dominate in multiple mediums! A-

John Wick is rated R and has a running time of 2 hours and 2 minutes.