Well, I think we all can agree that journalists who were looking for their headline for the Oscars broadcast were handed a gift at the very end. For those of you under a rock for the past several days, let me briefly summarize the events that unfurled for the Best Picture winner at the 2017 Oscars.

It’s 12:05 am EST; the natives are getting restless, but it’s been a relatively enjoyable Academy Awards show and while La La Land was nominated for a historic 14 awards, it’s sitting with 6 wins with Best Picture being the only award left to announce. Moonlight, a film that had gained steam all season had won Best Supporting Actor and Best Adapted Screenplay, two big wins. Enter Warren Beatty and Faye Dunaway to announce the final award. A Bonnie and Clyde reunion! Only this time La La Land was about to get riddled with bullets. If you haven’t seen the awkwardness that is Envelope-gate, you need to see it immediately. Words fail to express the bazaar episode. Still, here’s my best go at it. Everything is running smoothly until Beatty opens the envelope. It’s not clear something’s wrong necessarily, but it looks like Beatty is trying some shtick. He’s delaying, the audience is laughing, Dunaway is jabbing at him in that, “he’s so incorrigible,” kind of way. Several beats pass though as Beatty just stalls and pauses as he stares at the card, and then he shows it to Dunaway, who just blurts out, “La La Land!”

The place erupts. The La La Land producers take the stage, make their speeches, and a

decent population of people probably turn off their televisions and go to sleep. However, what happens next is La La Land producer, Jordan Horowitz takes the stage to reveal that there’s been a mistake. It turns out, the accountants for Pricewaterhouse Coopers who handle the envelopes had mistakenly given Warren Beatty an alternative envelope (#alternativefacts) for Best Actress. This explains why he took so long to read the card; he was staring at Emma Stone’s name. When he showed it to Dunaway, likely in order to get her confirmation that something’s gone awry, she just saw La La Land and blurted it out. Once things were sorted out, Beatty grabs the mic to explain why he made the mistake, saying he was not trying to be funny, but the envelope he had said Emma Stone, La La Land. The true winner was Moonlight, and an obviously stunned group of produces for Moonlight take the stage and commence the most awkward and heartbreaking experience of literally taking Oscar statues away from other people who thought they won.

Anyway, this whole thing was bad for La La Land, really bad for PWC, great for Moonlight, and really great for viewers! Other than this, The People’s Critic did a fairly good job of calling the winners. La La Land did steal the show with 6 wins, but the 7th was stolen from them when Moonlight was announced as the real Best Picture winner. I correctly predicted 15 of the 24 categories. I went the wrong way on a few of them, but in a night of several upsets, 15 ain’t bad. I was correct in predicting an upset with Lonergan winning over Chazelle for Screenplay, and my biggest lock, Viola Davis, played out as well. Her speech was highly anticipated given her intensity and her role in introducing Meryl Streep for her Cecil B. Demille Award at the Golden Globes. It was a very inspired speech, but I found a little fault in her claim that acting is, “the only profession that celebrates what it means to live a life.” I think there are limitless creative outlets in the professional sphere where people can truly understand the value and enormity of living a life without being paid to read dialogue in front of a camera.  And then there’s that whole exhume the bodies from the graveyard thing. Anyway, that hereby ends my rant on pretentious actors saying pretentious things.

Hacksaw Ridge and Arrival did not come up empty as I had predicted; Arrival won the Sound Editing award and Hacksaw Ridge received Sound Mixing and the impressive Film Editing Oscar! I was correct in predicting Lion to leave empty handed, however. As far as the big ones, I got 5 of the big 6 awards right, and in an alternative universe, I got all 6 correct. Check out  my Awards Spotlight page if you want to see all of the results and all of my predictions.

I thought Jimmy Kimmel did a fantastic job as host. His monologue was political, satirical, but also on point with the tone of this year’s nominees. I give him a lot of credit for not disappearing after the opening monologue like so many hosts do. He took the stage multiple times throughout the show, made plenty of good jokes, and ran some gags including one where an unsuspecting group of tourists was ushered into the Dolby Theater during the Oscars and suddenly found themselves front and center with Hollywood’s finest. I’m always a sucker for Kimmel’s relentless attacks on Matt Damon, and he did not disappoint there whatsoever.

It was a fun Oscar night, and of course The People’s Critic’s Oscar dinner did not disappoint either, as we rolled out the red carpet for all of the celebrities, and everyone enjoyed some La La Lamb. Take a look at some of the fun! 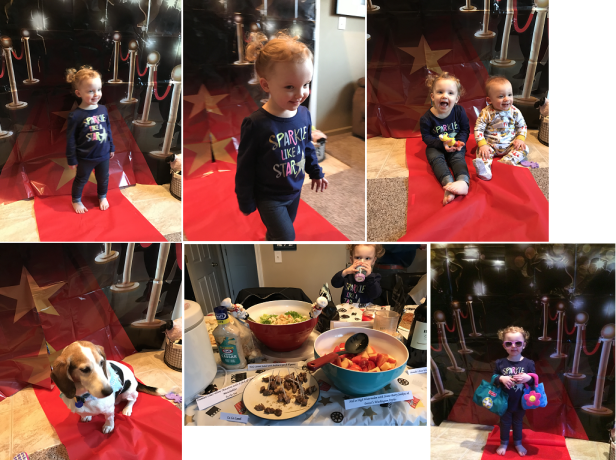 2 thoughts on “The Oscars: The People’s Critic Reacts”