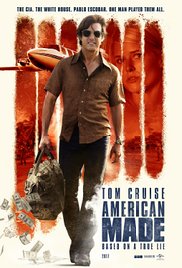 I had an idea once for a movie where I’d pluck out a completely inconsequential character from a well-known film, and then base an entire story around that character. What I love most about this idea is that the film I write would stand firmly on its own two feet with no overt mention to the protagonist’s connection to the larger, famous work. Only those who pick up the subtle clues would ever even be able to connect them.

I had a similar experience watching American Made. I’ll admit that I am not up to date on my drug cartel history, but I do watch and love the Netflix series, Narcos. So as I’m sitting, watching, and enjoying Tom Cruise’s new film American Made, I suddenly start thinking, “I know the name Barry Seal. Wasn’t he in an episode of Narcos?” And then two things happened: 1. I felt what it would be like to have that revelation of realizing a frivolous character from one story is now the subject of another, and 2. I realized I knew everything that was going to happen in this movie. I loved realizing the first thing, but I was not as excited about realizing the second one.

The good news is I love Tom Cruise, and he made up for all the predictability that followed. So it turns out, yes, this is the story of Barry Seal – they guy from Season 1, Episode 4 of Narcos. Seal, played by Tom Cruise is a TWA pilot, who as America is in the grips of the Cold War during the 1970s catches the attention of a CIA agent, Monty Schafer (Domhnhall Gleeson). Seal has been smuggling Cuban cigar exiles into the states as a means of additional income, and Schafer sees Seal’s activity not so much as punishable but as exploitative. Schafer offers Seal a chance to work secretly for the government, taking reconnaissance photos of South American guerilla camps and delivering bribes to Nicaraguan and Panamanian politicians and military personnel for information.

Of course, the CIA doesn’t pay much, and Barry wants nothing more than to make a great life for his wife Lucy (Sarah Wright) and kids. That being said, it doesn’t take long for the Columbian drug cartel headed by Jorge Ochoa (Alejandro Edda), Carlos Ledher (Fredy Yate Escobar), and an up-and-coming-kid Pablo Escobar (Mauricio Mejía) to take notice of an American spy plane running in and out of South America on a pretty regular basis. The cartel sees Seal’s activity not so much as punishable but as exploitative…rinse, wash, repeat (see what I did there?).

The movie spends the rest of its focus watching Seal bounce back and forth between running drugs for the cartel and informing on “Commies” for the CIA. Meanwhile Seal just keeps getting richer, and richer and richer.

Still, the movie doesn’t jive like I wanted it to. I think director Doug Liman and screenwriter, Gary Spinelli bet on the fact that most people who see this film wouldn’t have seen episode 4 of Narcos. I also think they knew Tom Cruise in a plane is something people enjoy. Additionally, this marks the second collaboration between Liman and Cruise after 2014’s Edge of Tomorrow, or was it called Live Die Repeat? No one knows for sure. Anyway, that was a great movie and Liman directed the hell out of it, a film which was basically Groundhog Day meets Terminator and has Cruise reporting to Brenden Gleeson. So why couldn’t Doug Liman direct the hell out of a movie that is basically The Wolf of Wall Street meets Top Gun where Cruise is reporting to Dohmnall Gleeson? He can and he pretty much does. Liman gets a great performance out of Cruise, and a little birdy tells me there are at least two more Liman/Cruise joints in the works. This is good news.

What doesn’t quite jive for me in this film are the circumstances, a deficit that I think mostly falls on the writing. There is a lot of coincidence and shrugging off of impossible situations in American Made. At one moment Seal is in a Columbian prison as government agents are about to raid his New Orleans home with his family asleep inside. The next moment, Seal and his family are living in Arkansas and they own an airplane hanger. It’s not quite that sudden, but it’s pretty close. Gleeson’s Agent Schafer character is also oddly underdeveloped and while I understand his persona is supposed to be mysterious, he seems contradictory and far more dramatic than necessary. Lastly, Jesse Plemons is in this movie as a local sheriff, and I have to assume there is a cache of great footage of him on the cutting room floor somewhere because what’s left of his character is barely an arc.

All in all, Cruise continues to entertain and gives more than just an action-packed performance. In a fall season where all there is to see is It for the 10th time, this is a worthy film that has far more high points than low ones. B

American Made is rated R and has a running time of 1 hour and 55 minutes.