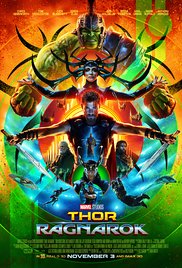 Most franchises 17 films deep into their canon start to spin their wheels, cash in, and forget what got them there in the first place. I mean there are just so many that get this far, am I right? I know you’re all saying but 1989s Godzilla vs. Biollante was such a great 17th movie in a franchise! Well for every Godzilla vs. Biollante there’s a Timothy Dalton as James Bond.

That’s right, if you couldn’t quite catch my subtext there, the point I was trying to make is that Thor: Ragnarok is the 17th studio film in the Marvel Cinematic Universe (MCU), and it’s pretty rare to see a franchise reach film number 17 and for that film to be as entertaining as this one is. Thor: Ragnarok basically picks up where Thor: The Dark World left off…or it would if this were a traditional sequel, but Thor has appeared in two other films since the second Thor film, and the MCU has released 8 films since 2013’s The Dark World. Therefore, Ragnarok is more like a sequel to Doctor Strange than a sequel to Thor: The Dark World. So Thor 3 basically takes some of the characters from Thor 2 and Avengers 2 and picks up where Doctor Strange 1 leaves off with a nod to Guardians of the Galaxy 2’s conflict, which complicates the events from Captain America 3. And if that makes sense to you, I have some tesseracts I’d like to sell you.

If you didn’t follow that bizarre set up, here’s one that might make more sense: Thor: Ragnarok finds Thor (Chris Hemsworth) unsuccessful in his search for the remaining infinity stones and returning home to Asgard only to notice that the 9 realms have gotten a little disorganized in his absence. Why? Well, Loki (Tom Hiddleston) of course! Those sons of Odin (Anthony Hopkins) are at it again, but this time the brothers learn that they

both have an older sister named Hela (Cate Blanchett), who has escaped from a prison she was sealed within long ago. Hela is Odin’s first born, and she was banished from Asgard for her unrelenting ambition. Now she looks to bring “Ragnarok” (or final destruction) to Asgard. Her first step is to get those brothers of hers out of the way, and so she casts them into space where the ultimately land on a trash planet called Sakaar and ruled by the Grandmaster (Jeff Goldblum). Now Thor must find a way to escape Sakaar and save his home planet from destruction.

While that synopsis is the gist of this film, the joyride that is Thor: Ragnarok is almost entirely separate from its plot. Humor is the key to this film’s success, and Disney/Marvel’s decision to tap Aussie writer/director/actor Taika Waititi most notable for his hilarious vampire comedy What We Do in the Shadows was a brilliant decision. This is easily the funniest Marvel film in the franchise. Every Marvel film brandishes humor here and there, but never has the humor been as clever, witty, and endearing as it is here. That’s not to say it’s not also an action film. Blanchett is wickedly brilliant as the scorned and rejected Hela, and for my money, she is now in the top three Marvel villains ever, only rivaled by Michael Keaton’s turn as Vulture in Spider-Man: Homecoming and the great Tom Hiddleston as Loki (villainy with a dash of heroism). Speaking of Hiddleston, he is once again great to see back donning the Loki horns. While he basically stole the show in Thor: The Dark World, he has far more competition in this film, but still does not disappoint. The competition I speak of is everywhere. Hemsworth, fresh off

being the most comedic part of the 2016 Ghostbusters reboot, flexes his comedy muscles (along with his other muscles) and delivers a great performance. Mark Ruffalo gets perhaps his most involved plotline to date and has some fun stepping into Tony Stark’s shoes…literally. And then there’s Jeff Goldblum as the Grandmaster, who turns the mostly evil immortal from the comics into the most delightful occasionally sinister master of ceremonies to great effect! Just to add some legitimacy to this acclaim, the actors onscreen in this film net a total of 17 Oscar nominations combined. Really.

Thor: Ragnarok is the most surprising Marvel film I’ve seen based on the expectations I had going in. The trailers make the film look like it’s basically a video game where Thor fights Hulk gladiator style and Jeff Goldblum steps in to say, “Eh, Hellooo.” Those things do happen, but this is a cohesive, jaunty, fresh action comedy that works very well. Mark Mothersbaugh’s score is also not to be ignored, giving the film this quirky, electronic vibe that I loved.  A

Thor: Ragnarok is rated PG-13 and has a running time of 2 hours and 10 minutes. There are two post-film sequences; one midway through the credits and one afterwards. Both are adequate, but nothing you HAVE to stay for if you’re running late for dinner.

Since originally ranking the Marvel films after Captain America: Civil War was released, 4 Marvel films have been released and we are about mid-way through “Phase Three” with only Black Panther, Avengers: Infinity War – Part 1, and Captain Marvel set to round it out. Thus, it is time to update the old rankings, and Thor: Ragnarok is the highest entry in nearly 4 years!