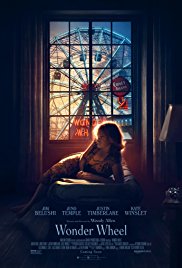 I’ve been enjoying attending annual Woody Allen theatrical releases since Celebrity was released in 1998; that’s 19 of his films in 20 years that I’ve seen in the theater. Today, that streak comes to an unfortunate end with Allen’s latest, Wonder Wheel. Wonder Wheel is the first Woody Allen film to ever be released in December (December 1st actually, which is Allen’s birthday), and while reviews were mostly poor, the holiday and Oscar films marginalized it within seconds, and it just never opened in any major way. Therefore, as a little birthday present to myself, I rented it on Amazon, and I will turn the frown upside down by making it the first post-theatrical release film I have ever reviewed.

The title Wonder Wheel refers to the Ferris wheel attraction at New York’s Coney Island, the main setting of the film. This is one of Allen’s most minimalist films in years or perhaps ever.  It feels and looks like a play, even more so than films Allen has directed based on his own stage plays! I am unsure if he shot Wonder Wheel at an increased rate, but it’s entirely possible. This decision to go full-Tennessee Williams, or maybe more appropriately full-Eugene O’Neill, is at first rather distracting, and I’ll admit, the film may be an homage to the stage, but perhaps a better story would be more worthy of this treatment.

Wonder Wheel is another mid-20th century period piece for Allen. It’s also another Coney Island backdrop, harkening back to Allen’s childhood, explored in several of his other films like Annie Hall, Manhattan, Radio Days, Purple Rose of Cairo, and Sweet and Lowdown among others, but this is the first completely set within the amusement destination, especially in its heyday. Kate Winslet plays Ginny, a waitress at a Coney Island clam shack who lives with her husband Humpty (Jim Belushi). Ginny ruined her first marriage by being unfaithful, and now she and her pyromaniac son live on the boardwalk with Humpty who also works at Coney Island as a carousel operator. Humpty was also previously married and had one daughter, Carolina (Juno Temple), who married a mobster displeasing Humpty and causing him to disown her and kick her out years ago. Suddenly, Carolina shows up on the boardwalk looking for Ginny to help her as she’s on the run from her mob husband and needs a place to hide. She also hopes Ginny can help her patch things up with Humpty. Complicating things one step further is our fourth-wall breaking narrator, Mickey, a Coney Island lifeguard played by Justin Timberlake. Mickey is our narrator, but he also involves himself in the lives of the characters finding himself attracted to Ginny. Ginny returns his favor and enjoys his attention, but she finds herself suspicious and jealous when on a chance meeting, Mickey also meets Carolina. The layers of drama unfold rather predictably, but that’s not to say there’s not an enjoyable arc to everything. Carolina’s immediate danger is nicely balanced with the complicated and adulterous love triangle involving Mickey, Carolina, and Ginny.

Wonder Wheel is definitely sub-standard Woody Allen. Kate Winslet is the main appeal, and her performance is actually quite strong. However, she is still the most developed character in a film full of caricatures. Allen’s three central characters are an adulterous divorcee, an alcoholic divorcee, and a mobster’s divorcee, and most of the time they are as one-dimensional as that. At the end, the story manages a brief bit of poignancy, albeit a duller sense than Allen is capable of creating. This is not the bomb it was made out to be, but like Coney Island itself, it could use a few more thrills. C

Wonder Wheel is rated PG-13 and has a running time of 1 hour and 41 minutes.