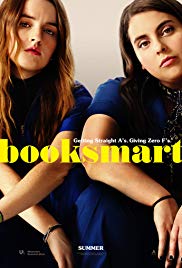 There was a time not long ago where we were getting a nice little onslaught of better than average coming of age films. The sweet spot maybe was 2013 – 2014; movies like Boyhood, The Spectacular Now, Mud, The Fault in Our Stars, and The Hunger Games films were all happening during this period, and the Marvel Cinematic Universe while in full swing, had not quite fully established its supreme dominance. Films like those seemed to have dropped off the mainstream in recent memory. Lady Bird certainly broke through in 2017, but other than that, it’s been a different sensibility at the movies. Fortunately, Bo Burnham’s 2018 film Eighth Grade and Olivia Wilde’s directorial debut, Booksmart may be proving that the time is right to resurrect this delicate genre where the performers wear their hearts on their sleeves and we reflect on our inner-child rather than galactic super-dominance. And just so we’re clear, I loved Avengers: Endgame, but variety is the spice of life!

Booksmart documents the final days of high school for Amy (Kaitlyn Dever) and Molly (Beanie Feldstein), two best friends who embraced school to the fullest, lead the student council, earned every academic honor, and have been accepted to prestigious colleges. Their beliefs were that in order to reach these epic academic heights, they had to be laser-focused on studies and extra-curricular activities, leaving no room for the indulgent parts of high school.

That being said, when circumstances reveal that several of Amy and Molly’s popular and partying classmates (whom they perceived were than bright) also had received admirable post-secondary opportunities, they realized that, perhaps they missed out on the high school experience after all, leading to a mission to make up for lost time in one night by hitting parties, giving into urges, and just being kids!

The bulk of the film can be described as in the vein of other films like Can’t Hardly Wait, American Pie, and Superbad where outsiders decide they want to be insiders and awkwardly work their way in only to learn it’s not so great on the inside, but the journey is the truly valuable experience. I’m not subjugating the plot to be critical because while this is a time-tested format, the journey truly is the valuable part, and Booksmart does just enough with this to make it stand out as clever, relatable, and entertaining.

Much (all) of the credit for this film’s success should be given to the two lead performers, Dever and Feldstein. This movie is two actresses away from being middle-of-the-road. Comparable to the way Metcalf and Ronan elevated Lady Bird, these two actresses give everything to their performances and make us care about them, their friendship, and their futures. Supporting roles that are practically cameos come from Jason Sudeikis (Wilde’s husband), Will Forte, and Lisa Kudrow who all basically bolster the comedy side of things, and they do so nicely. However, this film is all-in on its two leads.

Appreciating this film does involve some true introspection. Some of the negative criticisms I have read about the film come from reviewers who clearly just missed the nuances and the point. One reviewer mentioned that Booksmart wants you to laugh at someone being vomited on, but I don’t think that scene was meant to be funny at all. Another said that “name-dropping” Malala was in poor form, but if you’ve ever met a teenager, you’d know that this is something that they would totally do, and their reasoning for it is actually quite in the spirit of who Malala is and what she represents as an activist (not that it even has to be). What I’m trying to say here is that this film attempts to breathe the air its characters breathe, and if anything, I’d say it’s not authentic enough being set in a highly affected, mostly affluent school with kids who do not really represent everyday kids. Booksmart does not want to cater to perceived expectations. It also does not want to shock or make you uncomfortable; however at times it does both of those things because that’s life. B+

Booksmart is rated R and has a running tiem of 1 hour and 45 minutes.