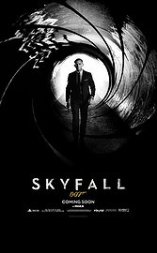 Skyfall marks the Bond franchise’s 50th year and 23rd film in that time. For those familiar with the franchise, it is not rare to see the world of Bond tweaked, updated, modernized, and “freshened up.” Skyfall is a very different Bond film, in that regard. It seems director, Sam Mendes goes out of his way to saturate his film with thematic trappings that chastise the egoism of youth and praise the wisdom of age. This is an intriguing direction to take, but it does slightly miss the mark.

In Skyfall, Daniel Craig reprises the legendary role for his third time. After a tragic mishap in Turkey, Bond finds himself off the grid and at a crossroads. A surprise attack on MI 6 forces his hand to once again enter the fray of espionage where he is met with doubt and reservation both by M (Judi Dench) and newly appointed Chairman of Intelligence, Gareth Mallory (Ralph Fiennes). It seems the world of espionage has become a digital one and the artistry of the field operative is becoming superfluous. Nonetheless, Bond is reassigned to active duty to track down an ex-operative and cyber-terrorist (Javier Bardem), fueled by revenge against those in the British government whom he believes betrayed him.

The Bond films that rest on a revenge storyline are historically some of the weakest entries in the history of Bond, and this one fits nicely in that group as perhaps the best of the weak. The action starts strong in classic Bond style, as 007 chases down a terrorist with a hard drive that contains all of the identities of undercover agents throughout the world. Bond and M’s relationship is explored in Skyfall in much more depth than ever before, and this film does advance the mythology of Bond a bit more than some other previous entries. However, the film does hit a snag as Bond goes through the motions of tracking down leads throughout China. It is in China where Bond delivers his line, “Bond, James Bond,” and it is also where he drinks a Heineken (Heineken reportedly paid $45 million dollars to have Bond sip their brew in Skyfall). Furthermore, the climax, which does reveal the film’s namesake, also feels a bit clunky and hokey. While Bardem’s villain, Silva does provide some memorable scenes, he is simply a melodramatic excuse to allow Bond to remind us not to underestimate the power of some spit and elbow grease. Silva is, instead, a missed opportunity to chew the scenery along side some of the best Bond villains.

Skyfall is not a bad Bond movie, and it is certainly not a bad movie. Sam Mendes accomplishes his goal of creating a heavy-handed thematically driven exploration of Bond’s inner workings. This is by no means a bad idea. However, this deviation from expectations is not executed with precision and allows the film to flounder in parts. There are some sequences that are absolutely heart pounding and the film leaves us eager to see what’s next; just don’t expect to see your Heineken investment pay off just yet. B-