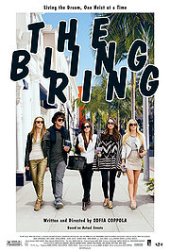 Sofia Coppola’s life of privilege is no secret; I mean she is a Coppola, daughter of Francis, and even appeared in all three Godfather films (she was one year old in the first one).  Privilege is an interesting topic, and the exposure of the jaded nature of the privileged is not a new subject for the film industry.  Coppola has forged this territory before first in 2003 with Lost in Translation, then in 2006 with Marie Antoinette, next in 2010 with Somewhere, and most recently with this year’s release of The Bling Ring.

Based on real events detailed in Nancy Jo Sales’s Vanity Fair article, The Bling Ring is about a group of shallow, obsessive teens who rob celebrity homes in order to emulate their lifestyles.  After using the Internet to track celebrities’ whereabouts, Marc (Israel Broussard) and Rebecca (Katie Chang) begin hand picking the residences of out-of-town celebrities to burgle.  Their three close friends Nikki (Emma Watson), Chloe (Claire Julien), and Sam (Taissa Farmiga) round out the ring of thieves who steal over $3 million worth of property in one year’s time.

This story is ripe for the hands of Coppola.  While known for searching for the sympathetic side of degenerative celeb culture, she is not quick to pardon the acts of these characters.  The Sleigh Bells’ song “Crown on the Ground” plays during the film’s opening credits suggesting the forthcoming loss of innocence and selfish deviance of the characters.   Coppola draws from Sales’s article to construct a twisted Bonnie & Clyde-like story with less-than admirable protagonists.  Here Coppola analyzes youth culture and its influences in an attempt to diagnose what has lead to this overwhelming degradation in the aspirations of young people.

While it is easy to blame Rebecca, Marc, and company for their ultimate predicament, Coppola does not place the blame solely on them.  Nikki and Sam’s mother, Laurie (Leslie Mann), religiously feeds her daughters Adderall because she is too consumed with vicariously preserving her own youth through her children’s experiences.  This pill/pharmaceutical culture is clearly linked to the excessive substance abuse carried out by these young characters.  Furthermore, Laurie lacks the backbone to provide a leadership role in these girls’ lives, yet attempts to home-school them with weak lessons about moral guidance.  This hypocrisy of adults presents an additional element to explain how and why the film plays out as it does.

Coppola also frames her film with confessionals from the “ring” after their inevitable capture.  In these confessionals, the young criminals speak frankly about how their society and surroundings damaged their self-image and consciousness to the point that they were motivated to do something about it.  Coppola proposes the question that with the media’s focus on saturating the market with the glamorous lives of the over-privileged youth who seemingly were handed fame and fortune, how is patience, hard work, and morality supposed to compete?  This is a disgusting question, and one that mature adults can easily answer, but the question is posed to immature, poorly guided young people, thus the answer is archetypically suggested by this film.

It is easy to dislike this film.  However, much like last spring’s Spring Breakers one must see the forest for the trees.  There is a mess here, but it is one often swept under the rug and films like this try to show what happens when too much dirt accumulates.  This notion is most realized when examining the captivating character of Nikki, played brilliantly by Emma Watson.  Nikki utters the film’s last words, which I will not spoil here, but the message is loud and clear and it resonates as Frank Ocean’s “Super Rich Kids” plays during the closing credits.  What I will say is that Watson has a cameo in Seth Rogan’s This is the End, and while that film certainly earns its title – perhaps this film is even more deserving.  The Bling Ring is one of Sofia Coppola’s best films in an impressively growing filmography.  Her subject matter may not vary much from film to film, but she has a knack for finding new, fresh ways to interpret a theme.  It can be a “tough pill to swallow” at times, but the film is an ambitious and well-made social satire that feeds off of the very problems it wishes to expose.  It is a weird yet substantial film!  A-

The Bling Ring is rated R and has a running time of 1 hour and 30 minutes.  Go in with an open mind and broadened expectations.  Also keep an eye out for Sofia Coppola’s good luck charm, Kirsten Dunst who makes an uncredited third appearance in a Sofia Coppola film.

By popular demand from my followers, or should I say follower, I have decided to review the avant garde Pop bio-pic Marie-Antoinette, directed by Sofia Coppola. I missed this movie during its original run (by “missed” I mean “skipped” because I find Kirsten Dunst to be a half-step above Kristen Stewart in terms of acting ability). However, due to a recent trip to Paris and Versailles, the film suddenly had more of a draw to me. The film loosely follows the story of how monarch-to-be, Louis XVI (played by Jason Schwartzman) is matched up with Austrian-born Marie-Antoinette (Dunst) by his father for political reasons. Soon the teenage pair are ruling France from the decadent and hypnotizing palace of Versailles with little knowledge about or regard for the country’s well-being. This film has a unique style and tone. This is not your run-of-the-mill straight factual bio-pic. Coppola uses bright colors, modern music, and even out of place modern props like a pair of Chuck Taylor Converse sneakers in the background of one shot to play up the youth and inexperience of her heroine. Coppola looks to explain, albeit not excuse, the doomed couple’s flawed reign.

Even more important is the film’s setting. Marie-Antoinette is filmed entirely at the Palace of Versailles. This is a special privilege, not often permitted by the French government and it is crucial for the film’s full vision. Coppola not only saturates the film with youthful imagery, but she also utilizes the spellbinding mystique of Versailles itself in order to illustrate the tremendous disconnect young Louis and Marie-Antoinette must have felt from their constituency. The lavish luxury is palpable and, at times, even disgustingly over-the-top. Even with such a mouth-wateringly lush location, the film is often flat from the acting to the rather uneventful plot, purposeful as this may be. I am not clamoring for a fully historically accurate portrayal, but the film needs more than just two hours of moodiness. There is an obviously looming sense of doom throughout this film, and this feeling mixed with the childish depiction of the protagonists does foster a note of sympathy for the child rulers, which is a credit to the director. Overall, the film benefits from a unique vision and a setting that is one of a kind. These characteristics certainly help the film overcome some of its shortcomings. B-