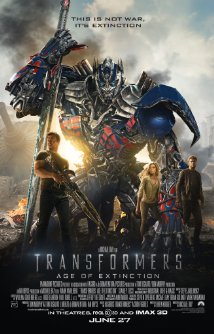 When the world is under attack by asteroids, alien robots, or even the Japanese, Michael Bay is there. Nearly 1/8th of Bay’s directorial career has been dedicated to the alien robot type of threat, and now with his fourth Transformers film, Transformers: Age of Extinction Bay actually manages a new level of self-indulgence: rebooting his own franchise trilogy with his own new franchise trilogy. Imagine this level of egoism; it would be like if George Lucas went and…oh wait…

It’s exactly like that. Bay moves his timeline forward five years after the near total destruction of Chicago (and Shia LaBeouf’s sanity) and interprets the action between the same Autobots and Decepticons through an entirely new set of human characters. This time our central human figure is Texas inventor Cade Yeager (played by the last person you’d ever expect to play an inventor-type character from Texas, Mark Wahlberg). Wahlberg actually has a lot of fun with the part though, and he actually continuously keeps the film from falling below the low bar set by the previous two Transformers films. Yeager lives on a farm where he experiments in his barnyard laboratory to create inventions in the vain of Randall Peltzer (do yourself a favor and see Gremlins if you don’t know what I’m talking about). Yeager is also the widowed father of Tessa (Nicola Peltz), his high school daughter whom Bay has seemingly discovered new camera lenses and angles for photographing in alarmingly close up ways. Cade is in financial trouble and while Tessa has earned several scholarships, she is continuously denied financial aid and still unable to afford tuition to go to college. Cade resorts to purchasing broken down items and fixing them in the hopes of turning a profit. One such item, a seemingly totaled semi-trailer truck, is actually battle damaged Autobot leader Optimus Prime living in exile. Yeager repairs Prime with the help of his friend Lucas (T.J. Miller) and in turn attracts the attention of CIA director Harold Attinger (Kelsey Grammer) and business tycoon Joshua Joyce (Stanley Tucci) both of whom want to capitalize on the alien metal Prime is made of called…wait for it…Transformium.

As it turns out Joyce is using the transformative metal, along with knowledge from a pact with certain Decepticons, to create a robot army that will revolutionize the U.S. military. Of course, when one puts trust into an alien race whose name comes from the root “Deceive,” one can expect complications. What results is the reincarnation of Decepticon leader Megatron as the more powerful Galvitron. Now it’s up to the Yeagers and Prime to gather the Autobot army and fight back.

This is a loud, long, and dumb movie, but it does fit right into a certain fun summer niche that is rather vacant this year. Still, Transformers: Age of Extinction does not fill that vacancy with high quality entertainment, but rather strives for mediocrity with momentary flashes of obscene and immoral product pandering in the style of the famously satirical Wayne’s World scene, only completely without any sense of irony. Bay does this unapologetically, which may explain his smirky IMDB photo (see right image).

The greatest fault with Transformers: Age of Extinction remains its running time. Even the most excited Transformers fan is likely to lose interest around the 100 minute mark, but that still leaves another hour left! This is the best Transformers film since the first one in 2007, but that’s like saying this is the best Chicago Cubs season since 1908 – there hasn’t been much to brag about since. Nonetheless, audiences have come to know what to expect from Bay, and his movies make money, so why should he do anything differently? Wahlberg is all in and his commitment makes the ride feel fun. If you can rise above your sensibilities, there is a movie here, but that’s about all I can say. C

Transformers: Age of Extinction is rated PG-13 and has a running time of TWO HOURS AND FOURTY-FIVE MINUTES!

3 thoughts on “Transformers: Age of Extinction”