Let me first get this out of the way for all of you scientists out there. This is not a movie about huge clouds of dust and gas collapsing under their own gravity until the particles are so densely compacted that they fuse into a celestial body and…a star is born. This deceptively titled film is about a popular Americana singer falling in love with young unknown songstress, and her subsequent rise to fame as a pop star.

A Star is Born stars Bradley Cooper as Jackson Maine, a massively popular musical act who is over the peak of his fame. His fans are fervent, but his shows are routine, his hearing is going, and let’s just say he has a bit of a drinking problem. After one of his shows (and a bottle of whiskey), Jackson slinks into an underground bar in search of further libations. To his surprise, it’s a drag bar and the singers there are star-struck by his presence. While the bar caters mostly to drag singers, Ally (Lady Gaga), a former waitress at the bar is permitted to sing there since her voice is so incredible. During a remarkable rendition of “La Vie en Rose,” Jackson is hooked by her talent, look, and style leading him to want to meet her. After a romantic night of stories and songs, Jackson is inspired and he invites her to perform with him, catapulting her from an unknown club songstress to a mainstream sensation. 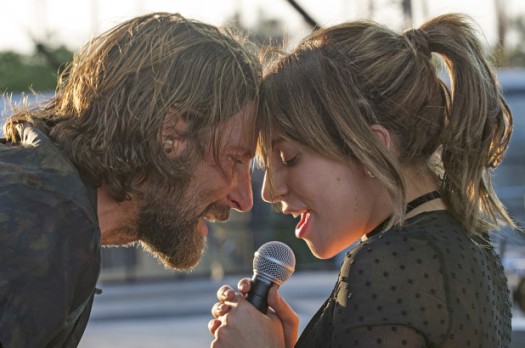 A Star is Born is an example of a subsection of film where execution, talent, and polish supersede familiar and uninspired storylines. Films like Avatar, Flight, and Straight Outta Compton come to mind in that you know precisely where every beat is, but the journey through the familiar territory is worth the predictability. The rise and fall of a superstar and the spiral downward is a time-told tale, so time-told in fact that this exact story has hit the big screen three times before, once in 1937 with Janet Gaynor and Fredric March, once in 1954 with Judy Garland and James Mason, and perhaps most famously in 1976 with Barbra Streisand and Kris Kristofferson. This time however, in the capable hands of first-time director Bradley Cooper, the story remains the same, but new life is breathed into it thanks to some vibrant direction and incredible on-screen talent and chemistry. Cooper does attempt a few curve balls in here to try to liven the story up a bit, but to no real effect. Cooper is a true student of film, however, and his first directorial effort being a remake of a classic is an ideal choice. His choices are deliberate, and the film is full of examples of film theory ranging between classic Hollywood and a modern approach. As an actor, Cooper adopts a twangy gravelly grumble reminiscent of Clint Eastwood that I did find a bit distracting. While A Star is Born is an impressive outing full of passion, Cooper has a masterpiece in him, but this is not quite that.

Lady Gaga is also impressive on screen. As I mentioned earlier, her “La Vie en Rose” number is one for the history books full of glamour, charisma, and charm. Her acting is still a little on the green side, but when she’s on the stage, which is often, she’s excellent and many of the songs that come out of this film are quite good including, “Shallow” and “Always Remember Us This Way.” Many of the musical scenes were famously filmed at Coachella and other music festivals where Cooper and Lady Gaga would do a set in character in order to capture the true enchantment of live music, and these scenes do pop. They also contrast so nicely with the inevitable corporate packaging that Ally is later made to suffer. One interesting point to be made is that Lady Gaga is literally the only woman acting is this film, Brandie Carlile is there for a moment (as herself), but there are no other women! Characters’ mothers are all dead, no sisters, no female friends, and in the early bar scene where Jackson discovers Ally, all the women are men (in drag). The film is also directed and written by only men. Not to say that there’s anything necessarily erroneous about this, but I feel some of the “been-there-done-that” of the film’s story may be the result of such a non-diverse cast and crew.

A Star is Born is a good movie with an excellent first-directional effort by Cooper, and an exceptional use of talent. There is a lot to appreciate about the film, and with the added layer of the music, the film rises above traditional fare. B+

A Star is Born is rated R and has a running time of 2 hours and 16 minutes.