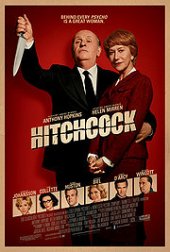 Movies about the movies are generally fascinating, and this genre has really never gone out of style. 2012’s best picture Oscar went to The Artist, a film about the emergence of sound in film. Robert Altman’s excellent film The Player satirizes the studio system as a backdrop to a murder mystery. The list of films like this dates back to the origin of the motion picture itself. While a common genre to make, these films often find a smaller niche audience and Sacha Gervasi’s Hitchcock will be no exception.

Hitchcock opens with a charming homage to Alfred Hitchcock’s television program, Alfred Hitchcock Presents. Anthony Hopkins plays the iconic director, and his bravura for capturing Hitchcock’s eccentricities without appearing overly melodramatic keeps the film afloat through its sprawling middle section (which is curiously similar to the sprawling middle section of the man himself). It can be a double-edged sword to be a director who takes on a film project about a brilliant director. Gervasi’s film is rather unimpressive in its form. It is constructed rather typically and while telling a story about some brilliant editing, it fails to really practice what it preaches. This film is also not a career spanning project; instead, it commences in medias res as the aging director searches for a project that will validate his position as a master of suspense who is not outgrowing his art form. That aforementioned project is 1960’s Psycho.

The battle to get Psycho made is an interesting story and one worthy of the legacy of films about films. Hopkins dispels some of the tainted oddity that surrounds the reputation of Hitchcock by revealing the passion that lies underneath. Additionally, the film showcases his symbiotic relationship with his wife, Alma (Helen Mirran), a previously unsung heroine who put up with a lot and always stood by the flawed auteur. However, the film does tend to be a bit too “inside” for the casual filmgoer. It is almost imperative to have a working knowledge of Psycho to truly enjoy the film. Moreover, there are multiple winks at the audience for those who come in to the theater already knowing some of the behind the scenes stories like Hitchcock’s battle with Bernard Herrmann about the score or what images were truly spliced into the famous shower montage.

Nonetheless, Hitchcock does sail on in a relatively entertaining way. There is a bit of a lull as the film shifts focuses from Hitchcock to Alma’s friendship with Whitfield Cook (Danny Houston). This side-story is pivotal, but it is dwelled on and overly represented. Hitchcock’s infamous curiosity with his leading ladies is explored as Janet Leigh (Scarlett Johansson) and Vera Miles (Jessica Biel) arrive on the set. This story of the director at work is much more compelling and deserves to be showcased a bit more than it is. This obsession that Hitchcock had with his lead actresses on set was also examined in HBO’s The Girl, which debuted on the network earlier this year. In that film, Toby Jones plays Hitchcock with a malevolent and sinister air. Hopkins provides a slightly softer, warmer (yet still faintly obtuse) view of his behavior. Hitchcock is far from the comprehensive, authoritative source on the life of its subject. That film is yet to be made and perhaps never will be. However, it is not without its charm and is sure to please fans, although it may fail to create new ones. B