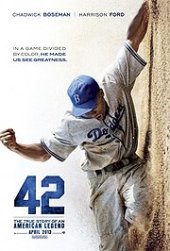 Films about sports are as old as the modern screen narrative gets.   It seems most movie fans have a favorite sports movie, even people who hate sports.  The reason for this is that a great sports movie is often not really about the game.  A great sports movie is about life, passion, talent, and determination.  These films strive to inspire, and the great ones usually do.  42 brings the epic story of Jackie Robinson to the big screen, and if you don’t tear up at this one, there’s something wrong with you.

Robinson’s story is fairly well-known, especially to baseball fans.  What may be a slightly lesser-known facet of Robinson’s story is the role Brooklyn Dodgers GM Branch Rickey plays in it.  Together Robinson (Chadwick Boseman) and Rickey (Harrison Ford) attack the prejudice inherent in post-WW II America by using America’s pastime as a weapon for unity.  This is not unlike the strategic move Nelson Mandela took in terms of using a nation’s love for Rugby as an equalizer in post-apartheid South Africa.  The film opens with Robinson already a star of the Negro League.  He is summoned by Rickey to join the Brooklyn Dodgers’ farm organization with the expectation that he would be brought up to the majors, breaking the color barrier and becoming the first African-American ever to play major league baseball.   Rickey senses that Robinson is the potential game-changer that he needs because he has both the talent for the game as well as the personal strength to withstand the firestorm that his presence in the majors will inevitably cause.   Rickey represents a dogmatic, purist love for something that has seemingly been soiled.  His motivation is fueled by love and respect  in a time when both of these qualities are in short supply (in terms of race relations).

Robinson’s story is treated with great respect in 42.  Director Brian Helgeland does not sugar-coat America’s racist past, but it could be said that he stereotypes it a bit.   Nonetheless, he uses the game of baseball as a way to survey the various racial perspectives shared throughout different regions and classes in mid-20th century America.  This helps 42 rise slightly above a standard bio-pic into something of an American culture expose.  Robinson is not simply pitted against “racism.”  He is doubted by timid hypocrites like Rickey’s associate Harold Parrott (T.R. Knight).  He is hated by southern simple-folk who are frightened by change like Phillie’s manager Ben Chapman (Alan Tudyk).  He is isolated by skeptical teammates who feel under-valued like Dixie Walker (Ryan Merriman).  He is also anxious about what his presence means to other struggling African-Americans like journalist, Wendell Smith (Andre Holland) and idolizing child-fan Ed Charles (Dusan Brown).  Robinson’s wife Rachel (Nicole Beharie) effectively reveals the source of much of Robinson’s strength against many of these different and difficult stresses.

Consequently,42 is one of the best films of a young 2013, and it is certainly an excellent addition to a long line of great sports movies.  It does rely on stereotype and simplification from time to time, and Robinson is also depicted as a virtually flawless individual.  However, these choices are clearly deliberate, and when an audience analyzes the intentions of the film, these choices make sense.  At the end of 42, we are left feeling a strong sense of history as well as the emotional dynamic between the strength of a team and the even greater power of an individual.  A-