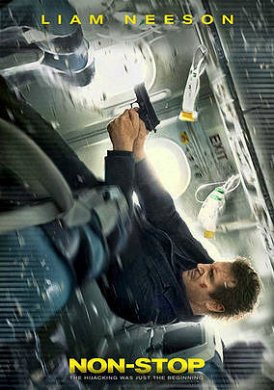 It all started when the daughter of a man with “a particular set of skills” was suddenly Taken.  Now, following a string of successful “one-man army” style films, 61-year-old Liam Neeson has undeniably carved out a new niche for himself as a no-holds-barred action hero!

Non-Stop is the story of Bill Marks, a U.S. air marshal who finds himself on a trans-Atlantic flight from New York to London.  While in flight, Marks receives a text over his secure cell phone network requesting $150 million be wired into an account or a passenger on the plane will die every 20 minutes.

Soon it becomes apparent that the terrorist did not choose Marks’s plane by accident.  We learn that Marks has had a troubled past; much of it he has tried to erase with alcohol.  40,000 feet above the Atlantic, Marks has no one to trust but himself…and his particular set of skills.

Non-Stop is surprisingly well executed.  Director, Jaume Collet-Serra (Unknown) keeps the pace moving and has a lot of fun while doing it.  Much of the enjoyment of the film revolves around trying to figure out who is texting Marks, and Collet-Serra along with the film’s three screenwriters make sure that everyone on the plane is a suspect.  Is it the pretty and anxious seatmate, Jen (Julianne Moore)?  Is it the flight attendant from Downton Abbey (Michelle Dockery) or the flight attendant who recently won an Oscar (Lupita Nyong’o)?  There is no shortage of characters to consider.

The other great thing about Non-Stop is how thoroughly entertaining Neeson has become in these types of roles.  The rugged, broguish Irishman commands the screen even when the character he’s playing is not so confident.  Neeson keeps the audience’s attention and interest even when the story gets convoluted and implausible.

The implausibility of the film’s final act is the only real nit-pick that I can make, but it is hardly an issue when considering the film’s overall premise.  Non-Stop is not the first airplane thriller, and it is keenly aware of this.  Instead of falling into “been there, done that” caveats, Non-Stop builds on scenarios you’ve seen before by including them in interesting ways.  When the passengers catch wind that their plane may be high-jacked, several of them consider ganging up on the suspected terrorist, not unlike the passengers of United 93.  The limitations of technology in regards to air travel is explored, and the technical limitations related to the recent disappearance of Malaysian Flight 370 feel that much more eerie in the wake of this film.

These references to serious issues are not in bad taste but are true conversation starters about the idiosyncrasies of air travel.  There’s that, but then there’s a sudden nose-dive creating a moment of zero-G’s that send a handgun floating right into Neeson’s hand at precisely the right moment.  I’m not sure how long it will be before these Liam Neeson roles begin to seem more funny than fun.  We can probably breathe easily until we see his name in the credits for The Expendables 9: Taken to the Max.  B+

One thought on “Non-Stop”